The ankle is the region where the foot and the leg meet. The ankle joint is actually composed by three smaller joints:

The boney architecture of the ankle consists of three bones: the tibia, the fibula (in the leg) and the talus (in the foot). The talus is also called the ankle bone since it’s the most important bone in the ankle articulation. In normal health conditions, the articulation between the tibia and the talus (ankle mortise joint) bears the greatest part of body weight: it is the region where ankle efforts are mostly concentrated.

The medial malleolus is a boney process

extending distally off the medial tibia. There is also a lateral malleolus, generated by a distal-most aspect of the fibula. Together, the two malleoli, along with their supporting ligaments, stabilize the talus underneath the tibia. 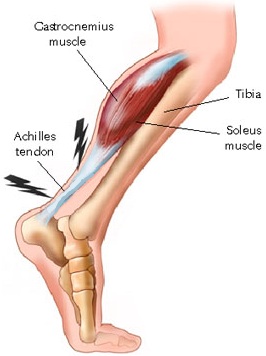 The calcaneus is also attached to the Achille’s tendon (also known as the calcaneal tendon or the tendo calcaneus), that is a tendonous extension of gastrocnemius and soleus muscles of the leg. It attaches the heel to the posterior leg.

In addition to these, the geometry of the different bones that form the articulation permits other more limited movements, such as foot eversion and inversion.

23 thoughts on “the Ankle Joint: some hints”