A famous movie showed us the advantages of having more limbs than usual. A common person with, for example, six independent arms could be stronger than normal, more dexterous and more efficient in killing annoying spiders. The four additional arms would actually be part of his body, normally connected to his motor nerves in order to be very accurately controlled by his brain. He would also feel pain if one of his additional arms was hurt.

Try to figure out the sensation, I mean the physical sensation, of being able to control each single limb of your body. Focus on all the feelings that you can actually experience with your legs and arms (temperature, pain, sense of touch, shape recognition, EVERYTHING!): it’s amazing. Each part of our body is innervated in a way that determines to which extent we “feel” neuro-biological phenomena. Our nerves get grouped in the spinal cord and the data they collect are transmitted up to the brain. In different areas of the primary motor cortex we can actually find a precise mapping of all the different body regions that are directly responsible for the exchange of sensory and motor information. So, for instance, it is possible to localise the motor cortex area corresponding to the tip of our left thumb. 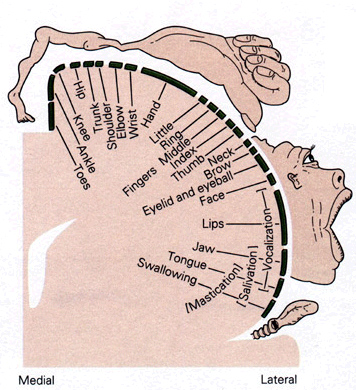 Now, the fact is that innervation of body regions is not uniform at all. Our lips are clearly more sensitive than our elbows. These differences are respected at the level of the motor cortex. Basing on the amount of cerebral tissue or cortex devoted to a given body region, some smart people proposed a funny representation of primary motor cortex anatomical divisions (picture on the left). In this bizarre cortical homunculus, the size of each body region is proportional to how richly innervated that region is, and not to its actual size. This brain representation develops over time and is different for each individual. What is sure is that our brain “feels” the presence of each single part of our body according to this representation at the level of the primary motor cortex. This leads us to the concept of “body within the brain”:  one’s hand, or toe, or nose exist as soon as it is represented by a specific region of the primary motor cortex.

Now let’s get back to the man with six arms. In his cortical homunculus we will be able to recognize each single arm region. This is due to the fact that, in his case, a cortical reorganization takes place in order to best define its personal “body within the brain” representation, including its peculiarities. Cortical reorganization is somehow continuous during the whole life and corresponds to the redistribution of nerves in those areas that undergo some changes, becoming different than before. This process is not immediate and takes some time. In some cases, as we are going to see, some problems may arise.

Amputees may suffer from the Phantom Limb Syndrome. What’s that? Below here we have a nice definition, found on this website:

Phantom limb syndrome is the perception of sensations, usually including pain, in a limb that has been amputated. Patients with this condition experience the limb as if it were still attached to their body, as the brain continues to receive messages from nerves that originally carried impulses from the missing limb. The exact cause of phantom limb syndrome is unknown. Presumably, the sensations are due to the brain’s attempt to reorganize sensory information following the amputation. The brain must essentially “rewire itself” to adjust to the body change.

Approximately, 60 to 80% of amputees suffer from this syndrome. They might feel the sensation of having the missing limb shorter or longer than normal, or positioned in a wrong and painful way, or they may experience tingling, cramping, heat, and cold sensations in the portion of the limb that was removed. Why does this happen? Even if the limb is no longer part of the body, the nerve endings at the amputation site continue to send signals to the brain. At the level of the primary motor cortex, the brain “thinks” the limb is still there! At the same time, slowly, cortical reorganization starts “updating” the distribution of cortex regions.

A more annoying side of Phantom Limb Syndrome is that of Phantom Limb Pain. It is the arising of mild to extreme pain felt in the amputation area. In general, any sensation that the limb could have experienced prior to the amputation may be experienced again and amplify pain conditions. Usually, corresponding to cortical reorganization, phantom limb sensations usually disappear or decrease over time. Some medical treatments usually include heat application, relaxation techniques (massage, electrical nerve stimulation), neurostimulation techniques (such as spinal cord or deep brain stimulation) or surgery (in the case of scar tissues entangling a nerve).

42 thoughts on “How many limbs do you actually perceive?”