Imagine you’re in the bus leading you home. Outside it’s snowing, the bus is stuck in traffic, you’re damn freezing. Well, soon you’ll just have to touch something on your wrist in order to feel warmer almost instantaneously. This magic something is called Wristify and is one of the thousands awesome technological inventions made day by day at MIT. Press and official images can be found on the official webpage of the project. In this post we’ll see its basic working principle. 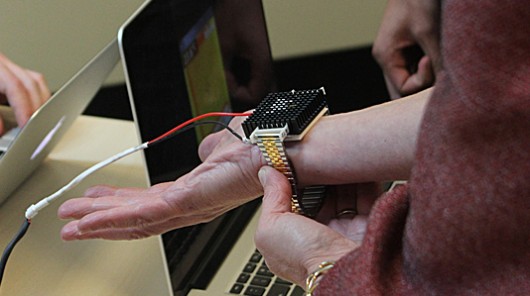 Technically, Wristify is a thermoelectric bracelet based on the principle that heating or cooling the skin on one part of the body can make the entire body feel warmer or colder. Developed by four MIT engineering students who adopted the motto “thermal comfort, reimagined“, this interesting device is supposed to help cutting the amount of energy currently used to heat or cool entire buildings. Logically, if everyone could be able to autonomously tune their body temperature according to their preferences, there wouldn’t be need to continuously heat, for example, huge rooms for conferences or shopping malls areas. Ideally, in the long term, it would be reasonable to expect significant savings.

Currently at working prototype stage (15 models have been developed up to now), this portable mini-heater looks like a wristwatch. The key difference is the custom copper-alloy-based heat sink on which Wristify’s working principle depends. Readings from embedded thermometers measure external and body temperature. With such information, an automated control system automatically adjusts the intensity and duration of thermal pulses that are delivered to the wrist via the heat sink. Thanks to a lithium polymer battery, the current prototype can run for up to 8 hours. As previously said, the team found that minute, rapid changes in temperature on one part of the human body can affect the whole body. They discovered that a change of 0.1° C per second is the minimum rate required to make the entire body feel several degrees warmer or colder (the current prototype is capable of a rate of change of up to 0.4° C per second).

The team recently took out the first prize in MIT’s annual Making And Designing Materials Engineering Competition MADMEC (USD 10,000). They plan to use the money to continue development of the device, aiming to develop more advanced algorithms and improve the automation of the thermal pulses.

sources: this, that and another one