By adding electronics and computation technology to a simple cane that has been around since ancient times, a team of researchers at Columbia Engineering have transformed it into a 21st century robotic device that can provide light-touch assistance in walking to the aged and others with impaired mobility. A team led by Sunil Agrawal, professor of mechanical engineering and of rehabilitation and regenerative medicine at Columbia Engineering, has demonstrated, for the first time, the benefit of using an autonomous robot that “walks” alongside a person to provide light-touch support, much as one might lightly touch a companion’s arm or sleeve to maintain balance while walking. Their study has been published in the IEEE Robotics and Automation Letters.

“Often, elderly people benefit from light hand-holding for support,” explained Agrawal, who is also a member of Columbia University’s Data Science Institute. “We have developed a robotic cane attached to a mobile robot that automatically tracks a walking person and moves alongside,” he continued. “The subjects walk on a mat instrumented with sensors while the mat records step length and walking rhythm, essentially the space and time parameters of walking, so that we can analyze a person’s gait and the effects of light touch on it.”

The light-touch robotic cane, called CANINE, acts as a cane-like mobile assistant. The device improves the individual’s proprioception, or self-awareness in space, during walking, which in turn improves stability and balance. “This is a novel approach to providing assistance and feedback for individuals as they navigate their environment,” said Joel Stein, Simon Baruch Professor of Physical Medicine and Rehabilitation and chair of the department of rehabilitation and regenerative medicine at Columbia University Irving Medical Center, who co-authored the study with Agrawal. “This strategy has potential applications for a variety of conditions, especially individuals with gait disorders.”

To test this new device, the team fitted 12 healthy young people with virtual reality glasses that created a visual environment that shakes around the user – both side-to-side and forward-backward – to unbalance their walking gait. The subjects each walked 10 laps on the instrumented mat, both with and without the robotic cane, in conditions that tested walking with these visual perturbations. In all virtual environments, having the light-touch support of the robotic cane caused all subjects to narrow their strides. The narrower strides, which represent a decrease in the base of support and a smaller oscillation of the center of mass, indicate an increase in gait stability due to the light-touch contact.

“The next phase in our research will be to test this device on elderly individuals and those with balance and gait deficits to study how the robotic cane can improve their gait,” said Agrawal, who directs the Robotics and Rehabilitation (ROAR) Laboratory. “In addition, we will conduct new experiments with healthy individuals, where we will perturb their head-neck motion in addition to their vision to simulate vestibular deficits in people.”

While mobility impairments affect 4% of people aged 18 to 49, this number rises to 35% of those aged 75 to 80 years, diminishing self-sufficiency, independence, and quality of life. By 2050, it is estimated that there will be only five young people for every old person, as compared with seven or eight today. “We will need other avenues of support for an aging population,” Agrawal noted. “This is one technology that has the potential to fill the gap in care fairly inexpensively.”

The School will be held in Montpellier, France, from 23th to 28th September 2019, and is open to Master students, PhD students, Post-docs and participants from industry.

All information can be found on the official website: http://www.lirmm.fr/sssr-2019/

Robotics enables surgery to be less invasive and/or to enhance the performance of the surgeon. In minimally invasive surgery (MIS) for instance, robotics can improve the dexterity of conventional instruments, which is restricted by the insertion ports, by adding intra-cavity degrees of freedom. It can also provide the surgeon with augmented visual and haptic inputs. In open surgery, robotics makes it possible to use in real time pre-operative and per-operative image data to improve precision and reproducibility when cutting, drilling, milling bones, to locate accurately and remove tumours. In both cases, as in other surgical specialities, robotics allows the surgeon to perform more precise, reproducible and dextrous motion. It is also a promising solution to minimize fatigue and to restrict exposition to radiation. For the patient, robotics surgery may result in lower risk, pain and discomfort, as well as a shorter recovery time. These benefits explain the increasing research efforts made all over the world since the early 90’s.

Surgical robotics requires great skills in many engineering fields as the integration of robots in the operating room is technically difficult. It induces new problems such as safety, man-machine cooperation, real time sensing and processing, mechanical design, force and vision-based control. However, it is very promising as a mean to improve conventional surgical procedures, for example in neurosurgery and orthopaedics, as well as to provide innovation in micro-surgery, image-guided therapy, MIS and Natural Orifice Transluminal Endoscopic Surgery (NOTES). 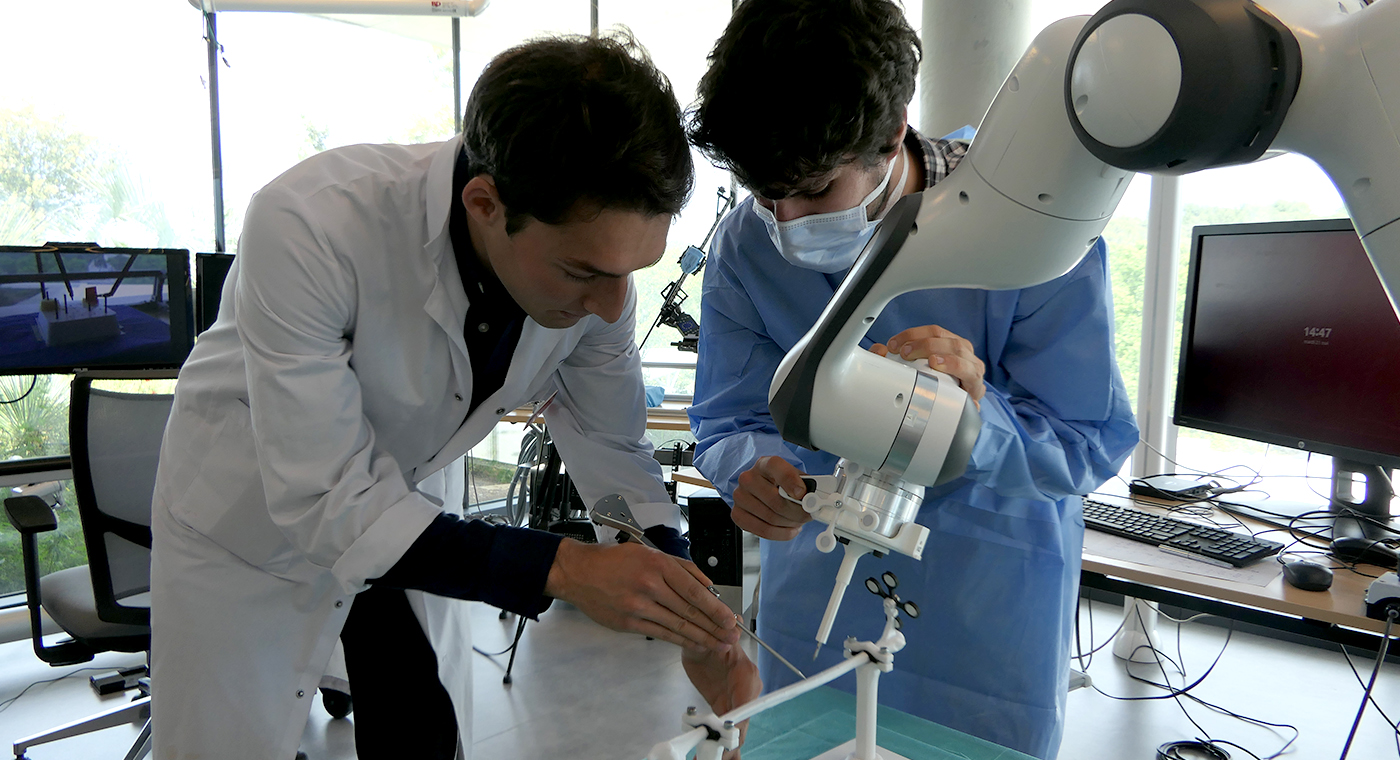 The highly interdisciplinary nature of surgical robotics requires close cooperation between medical staff and researchers in mechanics, computer sciences, control and electrical engineering. This cooperation has resulted in many prototypes for a wide variety of surgical procedures. A few robotics systems are yet available on a commercial basis and have entered the operating room namely in neurosurgery, orthopaedics and MIS.

Depending on the application, surgical robotics gets more or less deeply into the following fields:

During the Summer school, these fields will be addressed by surgeons and researchers working in leading hospitals and labs. They will be completed by engineers who will give insight into practical integration problems. The courses are addressed to PhD students, post-docs and researchers already involved in the area or interested by the new challenges of such an emerging area interconnecting technology and surgery. Basic background in mechanical, computer science, control and electrical engineering is recommended.

Medtronic – 2016 revenue: $29bn – The leading medical device company in the world, Medtronic, enjoyed a staggering 42% growth in revenue compared with 2015 figures ($20.3 billion). The medical device giant operates in over 140 countries and employs more than 100,000 people that work across its principal units: cardiovascular, diabetes, spinal and biologics, neuromodulation, surgery and cardiac rhythm disease. Much of 2016 growth can be attributed to the completion of a very successful acquisition of medtech company Covidien.

Johnson & Johnson – 2016 revenue: $25.1bn – The second biggest medical device company on the list is American biopharmaceutical, consumer goods and medical device giant Johnson & Johnson, which has been a well-known household name across the globe for several decades. Their ranking on this list is based on the revenue from the company’s medical device subsidiaries that include Ethicon, Acclarent and DePuy Synthes. The group develop and manufacture products in various therapy areas: orthopaedic, cardiovascular, diabetes, vision care and surgery. The company saw a 2.6% increase in revenue in 2016 and intends to drive further growth in 2017 through greater innovation, portfolio management and by expanding into emerging markets.

GE Healthcare – 2016 revenue: $18.2bn – In the top three medical device companies in the world, General Electric is another multinational conglomerate that has a thriving healthcare segment, commonly known as GE Healthcare. The company produces medical devices like x-rays, ultrasound machines, incubators and CT image machines. It also develops devices that aid research and drug innovation and biopharmaceutical manufacturing. In 2016, the company experienced healthy 17.3% margin and in 2017, it aims to grow by expanding further into emerging markets and China. Recently, GE Healthcare has committed $300million under their initiative, Sustainable Healthcare Solutions, which aims to bring ‘disruptive technologies’ to these emerging markets where healthcare is less accessible.

Fresenius (Medical Care) – 2016 revenue: $18bn – German medical devices company Fresenius Medical Care specialises predominately in developing medical supplies to treat patients with renal (kidney) diseases, particularly to aid dialysis. The company attributes strong growth of 7% in 2016 to an increase in sales of dialysers and machines as well as positive price and volume effects. It also grew its workforce from 104,033 in 2015 to 109,319 in 2016, a 5% increase. Fresenius Medical Care  intends to boost annual revenues to $28 billion by 2020.

Philips (Healthcare) – 2016 revenue: $16bn – 5th on a list of top medical device companies, Philips is a global conglomerate company that is the largest manufacturer of lighting in the world. Their healthcare segment is also hugely successful, developing medical devices in a number of therapy areas including anaesthesia, oncology and cardiology. The company experienced a 3% growth in sales in 2016 in part thanks to a serious of successful growth initiatives, including the acquisition of PathXL in June 2016 and the integration of Volcano back in 2015.

have a look at ProClinical Life Sciences Recruitment Blog to see the full top 10 list!

andreacollo
Create a free website or blog at WordPress.com.