Methods currently employed to determine the severity of a heart failure are very limited. Researchers at Eindhoven University of Technology and the Catharina Hospital in Eindhoven have therefore developed a method that is very quick, non-invasive, cost-effective and can be performed at the hospital bedside. Moreover, this method appears to have a predictive value for whether or not a double pacemaker will be successful. Researchers Ingeborg Herold and Salvatore Saporito received their doctorates last month for their study.

Heart failure – when the heart is no longer able to pump enough blood through the body – is a very common problem. To get the right treatment, it is important to measure how well the heart is still able to do its job. There are currently various methods for doing this, but all have their limitations. Sensors often need to be placed in the large arteries, via the shoulder or neck, and that is quite an invasive procedure. MRI is a possibility, but not for patients that are seriously ill. Patients that are short of breath nearly always undergo blood analysis, a method that examines the concentration of a particular protein in the blood and provides a very good, patient-friendly indicator, but it takes several hours before the outcome is known.

The Eindhoven researchers have developed a patient-friendly method that uses an echo scanner, which is known mainly for echoes performed during pregnancy, to determine the severity of heart failure. To do this, they measure the time it takes for the blood to travel from the heart’s right ventricle through the lungs to the left ventricle, which is responsible for pumping oxygenated blood through the body. In order to measure this pulmonary transit time (PTT), they inject harmless microbubbles that can be seen clearly by the echo scanner. They then look at the heart and see how long it takes for the bubbles to get from the right to the left ventricle.

It may seem simple enough but there was a significant scientific challenge in calculating an unequivocal PTT for the observed microbubbles that get dispersed in the blood flow. But once that had been solved, they compared the transit time with a number of existing indicators, developing a similar method on the basis of MRI. Comparisons revealed that the PTT measured with the echo scanner provides an excellent indicator for the severity of a heart failure. A healthy heart pumps the blood quickly through the lungs. The longer the PTT, the less well the heart performs. They examined subjects whose heart muscle no longer contracted well, which is the most common type of heart failure. Before the method can be used, there is still work to be done. For example, if it is to be both practical and fast, the analysis will have to be automated.

Ingeborg Herold gained her doctorate on Thursday 17 November for her thesis “Assessment of cardiopulmonary function by contrast enhanced echocardiography” while Salvatore Saporito received his PhD the same day for his thesis “Cardiovascular MRI quantifications in heart failure“.

According to Wikipedia, Osteoarthritis (OA) is a type of joint disease that results from breakdown of joint cartilage and underlying bone. The most common symptoms are joint pain and stiffness. Initially, symptoms may occur only following exercise, but over time may become constant. Other symptoms may include joint swelling, decreased range of motion, and when the back is affected weakness or numbness of the arms and legs. The most commonly involved joints are those near the ends of the fingers, at the base of the thumb, neck, lower back, knee, and hips. Joints on one side of the body are often more affected than those on the other. Usually the symptoms come on over years. It can affect work and normal daily activities. Unlike other types of arthritis, only the joints are typically affected.

OA affects the entire joint, progressively destroying the articular cartilage, including damage to the bone. Patients suffering from OA have decreased mobility as the disease progresses, eventually requiring a joint replacement since cartilage does not heal or regenerate. According to a 2010 Cleveland Clinic study, OA is the most prevalent form of arthritis in the United States, affecting more than 70% of adults between 55 and 78 years of age (that is, millions of people).

“My father was in major pain from his osteoarthritis,” explains Riccardo Gottardi, a scientist at the University of Pittsburgh supported by a Ri.MED Foundation fellowship.  “He was in so much pain that he had to undergo a double hip replacement followed by a knee replacement soon afterwards. I could see the debilitating and disabling effects the disease had on him, as he was restricted in his mobility and never fully recovered even after surgery. This was very different from the person that I knew, who had always been active and never shied away from long hours of work in his life – he just could not do it anymore.“

For scientists like Gottardi, a key obstacle in understanding the mechanisms of osteoarthritis and finding drugs that could heal cartilage, is that cartilage does not exist separately from the rest of the body. Cartilage interacts with other tissues of the joint, especially with bone. Bone and cartilage strongly influence each other and this needs to be taken into account when developing new drugs and therapies.

Gottardi and a team of researchers at the Center for Cellular and Molecular Engineering, led by Dr. Rocky Tuan, have developed a new generation system to produce engineered cartilage, bone and vasculature, organized in the same manner as they are found in the human joint.  This system is able to produce a high number of identical composite tissues starting from human cells. The team will use this system to study the interactions of cartilage with vascularized bone to identify potential treatments for osteoarthritis. The team’s research has two main objectives: to help understand how cartilage interacts with the other joint tissues, especially bone; and to help develop new effective treatments that could stop or even reverse the disease.  Their patent pending system is the first of its kind, and offers a number of advantages including the use of human cells that replicate native tissues. This system more closely matches the effects on humans than standard animal testing could achieve.

The team of scientists is further developing their system to produce tissues composed of more and different cell types that could better replicate the human joint. They have also started a number of collaborations with other research groups and companies that are interested in using the system to investigate other joint diseases and to test their product. “After seeing what my father went through,” says Gottardi, “I decided that I did not want to just watch by working on diagnostics, but rather, I wanted to be able to do something about osteoarthritis and contribute to the improvement of current treatment options.“

The squat movement can be described as a compound exercise which involves multiple groups of muscles. It is usually performed by recreational and professional athletes to strengthen hip, knee and ankle muscles. The squat exercise consists of two main phases, lowering and standing.

The body starts from a standing position and, replicating the motion performed while sitting on a chair, it is lowered until the squat configuration is achieved. All the lower limb joints are involved, with several groups of muscles that contract as they lengthen. This results in eccentric contractions.

The body leaves the squat configuration and returns to an upright position. The speed of this movement is continuously controlled, as well as the stable support provided by the feet. Once again, this is ensured by the combined action of all the lower limb joints. The same groups of muscles as for the lowering phase now shorten as they contract. This produces concentric contractions.

the 4th ASU Rehabilitation Robotics Workshop will be supported by the Virginia G. Piper Charitable Trust and hosted by Arizona State University

The main theme of this workshop is rehabilitation robotics. However, the workshop will include a wide range of topics aimed at improving quality of life and covering the multidisciplinary field of robotics, including human robot interaction and human motor control. The main goals of the workshop are to discuss the state of

the art in rehabilitation robotics and to identify the main challenges in this field.

This workshop is supported by a Piper Health Solutions grant to the School of Biological and Health Systems Engineering at Arizona State University (ASU).

This workshop is open to:

The event is free, however registration is required for admittance to the workshop.

Coming out of NCCR Robotics lab, the Bio-Inspired Robotics laboratory at University of Cambridge (previously at ETH Zurich, Switzerland), Noonee® is a revolutionary start-up business aiming to solve healthcare problems within the manufacturing industry. The idea is to provide an exoskeleton that supports the weight of the user only when they feel tired , rather than continuously taking on this weight – meaning that the wearer is using their muscles and actively, rather than passively, sitting.

Within the manufacturing industry, keeping employees healthy has been a major concern and challenge for many companies around the world for a long time. Jobs often involve spending long periods of time bending and crouching and as a result can leave staff with substantial back and knee problems. Of 215 million industry sector workers in the EU, a staggering 85 million are reported to suffer from muscle related disorders. Market solutions that are currently available may also pose problems as they limit short term tiredness by taking all the weight of the user, which can lead to muscle weakening. What is needed is a product that can support staff working on production lines while keeping them healthy. The “chair” is not a chair as we know it, but more of an exoskeleton for the legs with a belt to attach it to the hips and straps that wrap around the thighs. The slim structure has joints that allow the wearer to move freely, but when the wearer is in a position they wish to stay in for a long time (e.g. crouching under a car on a production line), this position can be fixed, meaning that the wearer does not need to use the same muscle groups for long periods of time to hold the position. The advantage of such a structure is that it can be worn anywhere and can also be used when standing and walking. This reduces the space required as compared to a traditional chair and reduces the hassle when compared to other solutions, such as chairs that are strapped to the user. 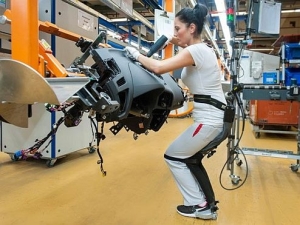 The Chairless Chair® is currently still in prototype and the current version requires the user to fix a position by crouching down into the required position and pushing a button. It is hoped that future iterations of the Chairless Chair® will be actuated to allow the system to become intelligent and understand the intention of the user, allowing it to be fixed into position without any additional input from the wearer.