The chameleon is able to catch a variety of different insects by putting its tongue over the respective prey and securely enclosing it. The FlexShapeGripper uses this principle to grip the widest range of objects in a form-fitting manner. Using its elastic silicone cap, it can even pick up several objects in a single gripping process and put them down together, without the need for a manual conversion. 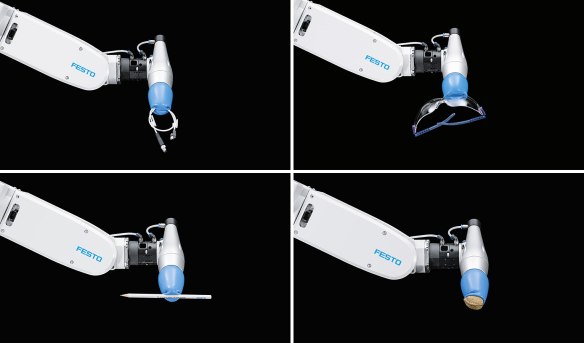 The gripper consists of a double-acting cylinder, of which one chamber is filled with compressed air whilst the second one is permanently filled with water. This second chamber is fitted with elastic silicone moulding, which equates to the chameleon’s tongue. The volume of the two chambers is designed so that the deformation of the silicone part is compensated. The piston, which closely separates the two chambers from each other, is fastened with a thin rod on the inside of the silicone cap. 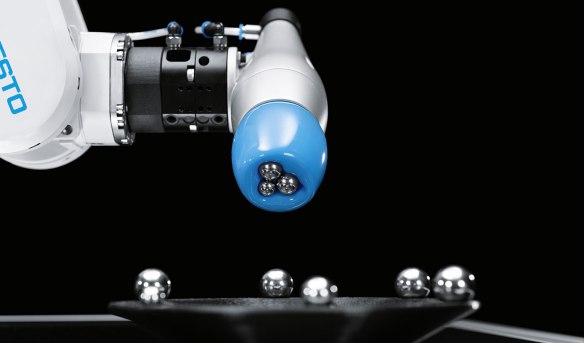 During the gripping procedure, a handling system guides the gripper across the object so that it touches the article with its silicone cap. The top pressurised chamber is then vented. The piston moves upwards by means of a spring support and the water-filled silicone part pulls itself inwards. Simultaneously, the handling system guides the gripper further across the object. In doing so, the silicone cap wraps itself around the object to be gripped, which can be of any shape, resulting in a tight form fit. The elastic silicone allows a precise adaptation to a wide range of different geometries. The high static friction of the material generates a strong holding force.

Once it has been put into operation, the gripper is able to do various tasks. This functional integration is a possible way of how systems and components can in future adapt to various products and scenarios themselves. The project also shows how Festo acquires new findings from nature for its core business of automation. But the aims of the Bionic Learning Network not only include learning from nature. Identifying good ideas and fostering them also plays a major part. The FlexShapeGripper came about through a cooperation with the the Oslo and Akershus University College of Applied Sciences and is an outstanding example for a close collaboration beyond company borders.