… GO! In this precise moment, you’re feeling an inexplicable feeling of happiness, aren’t you? Oh yes, I knew that. How? Simple, I computed it, and maths is not an opinion.

The equation reported a few lines below here is the expression of a computational model of momentary subjective well-being proposed in this article. Basically, it allows to compute momentary happiness based on expectations, rewards and past outcomes. The study was conducted on 26 subjects who had to deal with monetary options. In each trial, each subject had to choose between a certain option (win the sum X) and a gamble (gamble the sum Y). “Chosen gambles were resolved after a 6-s-delay period. Every two to three trials, subjects were asked to indicate” how happy they were at that precise moment.

I’ll leave you the pleasure to read the article for more details; in this post, we’ll simply take a look at the equation terms and try to understand them 🙂

Basically, at each trial j, if CRj is chosen then EVj = 0 and RPEj = 0; but if the subject chooses the gamble, then only CRj = 0, while EVj and RPEj are based on previous experience. In any case, these three quantities (CR, EV and RPE) are all linked to dopamine activity. Dopamine is a neurotransmitter (chemical released by nerve cells) which, in human brain, is responsible for sending signals to other nerve cells. The researchers “hypothesized that these dopamine-related quantities might explain momentary happiness“. 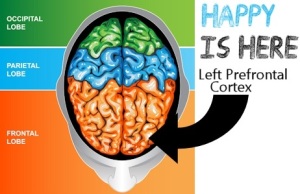 Using computational modeling, it was shown that “emotional reactivity in the form of momentary happiness in response to outcomes of a probabilistic reward task is explained not by current task earnings, but by the combined influence of recent reward expectations and prediction errors arising from those expectations“. In more general terms, happiness can be modeled as emotional reactivity to recent rewards and expectations. This allows to investigate the neural mechanisms which underlie the relationship between ongoing happiness and life events.

The researchers claim that their key finding is that “happiness is related to quantities associated with temporal difference errors that phasic dopamine release is thought to represent. At the very least, this hints at a link between dopamine and emotional state, consistent with suggestions that this neuromodulator plays a role in mood regulation in healthy and depressed subjects“. Upon further investigation, any scientific evidence that emotional state is related to brain and behavior could provide a framework for the development of model-based assays for the interpretation of mood disorders.