We live in the Instagram era, when even a simple cup of coffee suddenly becomes one of the most artistic things to be photographed. After sharing your shot with all your friends on the web (so that you’ll have shown that you DO have a social life, yop!), you put back your Reflex (the best camera ever for shooting cups of coffee, we all know that) and notice that its lens is a bit misted up. Inside. So you’ll never be able to get rid of it and all your shots will look blurry. You’ll be able to post only photos of blurry coffee served in blurry cups on blurry tables. You’ll be a blurry person, forever.

Now, transpose this “blurriness” to one of your eyes. Imagine you have one eye which “works” perfectly, like HD vision, and the other one with some misted up lens inside, so that everything you see looks blurry. This is clearly a much worse problem than not being able to shoot cool photos. This problem is called Cataract and nowadays is the most common cause of vision loss in people aged over 40.

Human eye is composed of different layers. Without giving too many details, a very important component of the eye is a transparent tissue known as crystalline lens. This lens is able to change its thickness so that the eye is able to focus on objects at various distances. The changes of thickness are controlled by a suspensory ligament, called Zonule of Zinn, that connects the crystalline to the ciliary body of the eye. Their combined movements are really important for correctly focusing light onto the back of the eye (the retina) so that images appear clear and without distortion.

The crystalline lens is made mainly of water and proteins and it is nourished by the aqueous fluid that is present between the cornea and the crystalline lens. Metabolic changes of the crystalline lens fibers over time lead to the development of opacifications, mainly due to the proteins that clump together. As a consequence, the lens gets “clouded” and this clouding is actually known as Cataract. This process normally worsens the way light enters the eye and, as a result, our sight is blurry.

Nowadays, modern cataract surgery is one of the safest and most effective surgical procedures. Over 90% of operations are successful in restoring useful vision, with a low complication rate. The operation itself is typically performed using only local anesthesia and in one-day hospitals. Very often, the postoperative recovery is really quick and can greatly reduce the patient’s dependence on eye glasses.

The most common surgical procedure for removing cataract is the so called phacoemulsification.

By using a microscope, the surgeon focuses on the lateral side of the eye and makes a small incision on the cornea.

Then, a tiny ultrasound probe is inserted into the eye in order to break the lens. The high vibration frequency (40 kHz) of the probe tip causes the emulsification of the lens material, which gets broken in very small fragments.

By accessing the eye always through the same incision, the crystalline pieces are removed through an aspiration probe.

Next, the same tool is employed again, this time to insert an artificial intraocular lens that actually replaces the crystalline. The artificial lens is usually made of plastic, silicone or acrylic compounds and is supposed to remain in place for the rest of the patient’s life. No stitch is generally necessary, just a protective shield is usually placed over the eye to keep it safe in the early recovery stages.

Recently, lasers have been approved for use in cataract surgery: they improve the accuracy of the surgery, since they reduce the need for surgical blades and other hand-held tools. Moreover, they result to be more efficient than ultrasonic probes for crystalline fragmentation. Laser-assisted cataract surgery is fairly new and significantly increases cataract surgery cost. However, medical consultation is always the best way to evaluate all the possible surgical risks.

sources: one, two and three 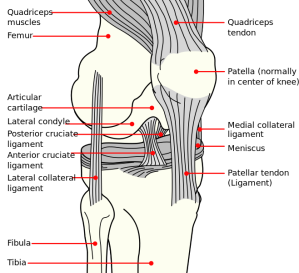 is a thick, circular-triangular bone which articulates with the femur and covers and protects the anterior articular surface of the knee joint.

It is the largest sesamoid bone in the human body. In the adult the articular surface is about 12 cm2 and covered by cartilage, which can reach a maximal thickness of 6 mm in the centre at about 30 years of age. 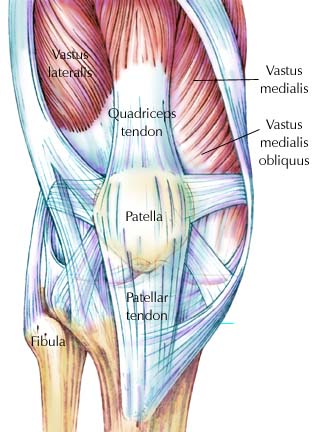 The patella is stabilized by the insertion of vastus medialis and the prominence of the anterior femoral condyles, which prevent lateral dislocation during flexion. The retinacular fibres of the patella also stabilize it during exercise.

The primary functional role of the patella is knee extension. The patella increases the leverage that the Quadriceps tendon can exert on the femur by increasing the angle at which it acts.

Patellar problems are among the most common causes of knee pain. This disease may be associated with other symptoms, such as instability or giveaway, dislocation, catching, grinding (crepitation), and/or swelling. These symptoms may present spontaneously or following injury (such as subluxations, blows to the front of the knee etc.). In general terms, patellar problems can be organized as:

Surgery is rarely necessary, and must be carefully considered. For example, for the “pain alone” case, surgery is rarely indicated since it may even make pain worse. In these terms, surgery is best used as a last resort, after all other techniques fail (normally: conservative care trials).

Arthroscopy is the very best way to

evaluate the patella and surrounding portions of the knee joint. Surgery will vary depending upon the type of patellar problem.  Of course it has risks, such as infection, stiffness, continued instability, weakness, pain, blood clots, fracture, impaired bone healing, etc. Recovery ranges from 6 weeks to 6 months, or even longer, depending upon the type of surgery, healing rates and limitations, and patient rehabilitation and efforts.

sources: two websites, this one and this one

What’s the use of worrying?
It never was worth while, so
Pack up your troubles in your old kit-bag,
And smile, smile, smile.

Last week I was invited to attend in a knee surgery at the Hospital Cavale Blanche, in Brest. For my PhD project, the research work that I am currently carrying on is actually closer to the mechanical side of Robotics (microactuators, tiny mechanical structures, wireless energy transfer techniques …). Although, since one of my supervisors is an orthopedic surgeon, I was invited to participate to TKA surgery. Basically, this meant two things: I had to put on specific sterilized clothes and, once in the operating room, I was allowed to watch and put questions 🙂

When I got here I was told that, for PhD students in the field of Robotic Surgery, half a day at the hospital was more useful, in terms of acquirable knowledge, than a month of theoretical study. Actually, one of the aspects I mostly appreciated was the “pedagogical approach” of the surgeon towards the observers. We were two, a sweet girl who’s completing her studies in Pharmacology and me. And the surgeon kept explaining each single step, motivating each procedure and answering all our questions. The confidence he showed while (literally) manipulating the patient’s knee and conducting the operation in front of younger and less experienced surgeons was simply amazing.

Before the surgery, the patient can decide to undergo either general or local anesthesia. Let’s say that the noises and, especially, the smells produced by hammers and saws are not the best way to stimulate one’s appetite 😉 But one thing is sure: after living the atmosphere of such a delicate surgical operation, and understanding that one can really trust expert surgeons, personally I wouldn’t be so worried/scared to undergo TKA as I was before 🙂

On the official website of CAE Healthcare an amazing new generation simulation mannequin, iStan, is described as follows:

CAE Healthcare’s new wireless and tetherless simulator represents the first real breakthrough in healthcare mannequin technology in the last 30 years. iStan looks, feels and acts so real your students won’t even know it’s a mannequin. iStan’s array of advanced features and breakthrough technology will take your simulation training to a new and exciting level of realism.

What are we talking about? iStan is an extremely realistic patient simulator, completely wireless (operated by a rechargeable battery) and able to reproduce an impressive range of articulated movements and reactions to the surgical acts that are simulated on (and inside) its body. It can sweat, bleed, breathe and even cry in a perfectly life-like way. Its spine, neck, arms and hips are programmed to mimic “the anatomical workings of the human body to a level of realism not possible with other simulators“.

heart attacks, anethesia effects, pupillary contraction and dilation. But also bone fractures, damages to vital organs and even a pregnancy. They all can be reproduced with incredible accuracy by iStan, which is currently used by future surgeons as a practise tool.

The price of a single mannequin is about 65 k€. Everybody is sure it worths investing in this product, presented as the most powerful and most advanced patient simulator in the world.